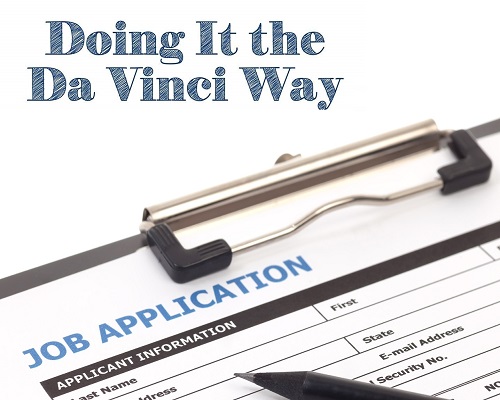 He listed all his abilities and sent it to the Duke of Milan.

No, Da Vinci realized that those were all his achievements and not the Duke’s NEEDS.

He placed himself in the Duke’s position and figured out what he could offer to improve his situation.

Leonardo’s approach was spot-on. He made sure to communicate how the EMPLOYER could benefit from his work. So why is it that, 500 years later, almost everybody makes this same mistake?

I have seen so many people writing down their entire biography. They enthusiastically list everything they can think of; stating all kinds of non-correlating job descriptions that talk only about their responsibilities.

And after that, they send this CV to every recruiting agency they can think of, hoping that something will come from it. We know how this turns out usually.

Key Point: Be deliberate in your application for job. Speak to the needs of the recruiter and in doing so, you would have succeeded in taking the first important step to being hired.